Discover the new article by Elise Chenot, associate professor in Geology and head of the Geosciences platform at UniLaSalle Beauvais, for The Conversation.

Streams are born from the accumulation of rainwater runoff, then grow into rivers that join to form seas and oceans. But not all streams stay on the surface: some encounter fractures in the ground and seep into it. In limestone country, these infiltrations slowly dig the rock by chemical and mechanical action until forming underground galleries which form the new underground bed of the rivers: it is the "karst", composed of caves and chasms that speleologists explore.

Together, these underground aquifers represent 99% of the Earth's liquid freshwater reserves, which is why it is so important to understand these resources in order to manage and protect them. In the context of increasing global warming and drought, these freshwater reserves are of growing interest to local communities. Pollution generated by human activities on the surface, such as industry or agriculture, can seep into the groundwater and alter the quality of drinking water. 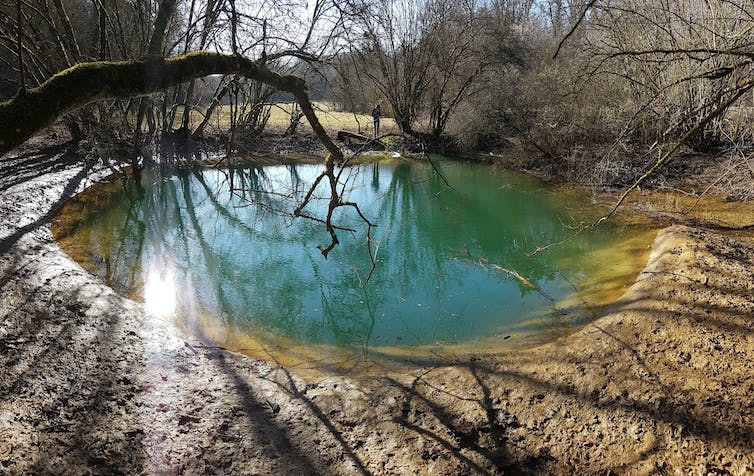 The karstic networks are meticulously described by speleologists during their explorations (dimensions and orientations of the galleries, volumes of the rooms, slopes...) who synthesize their observations in the form of sections and plans. Among the geological objects identified, the fractures constitute strategic points of access to underground water which are of particular interest to hydrogeologists for water supply issues. It is through these voids that surface water infiltrates the soil by gravity, but also that it resurfaces in very rainy weather, when the network of underground cavities is filled with water. Underground, some conduits are completely flooded and impassable.

Other means must be found to understand the circulation of underground water. The concept consists in staining the water with fluorescein at the most accessible upstream point of the river, and measuring the concentration of this fluorescein at the different known or supposed exit points (outlet or resurgence). It was, for example, a fire at the Pernod factories in Pontarlier in August 1901 that made it possible to establish the underground connection between the Doubs and the Loue via the release of large quantities of absinthe into the river.

In Meurthe-et-Moselle, Meuse and Vosges, the Aroffe is a river that plays hide-and-seek with the seasons and the weather between a perennial underground course and a temporary aerial course and continues to intrigue those who live with it. Indeed, the underground course of a potential of at least 30 kilometers is currently explored only on 2,5 kilometers. Speleologists and geologists have recently collaborated to refine the topographic and colorimetric studies already undertaken on one of the resurgences of the Aroffe, " le Fond de la Souche ", by testing a new technique based on the measurement of the electrical properties of the subsoil. 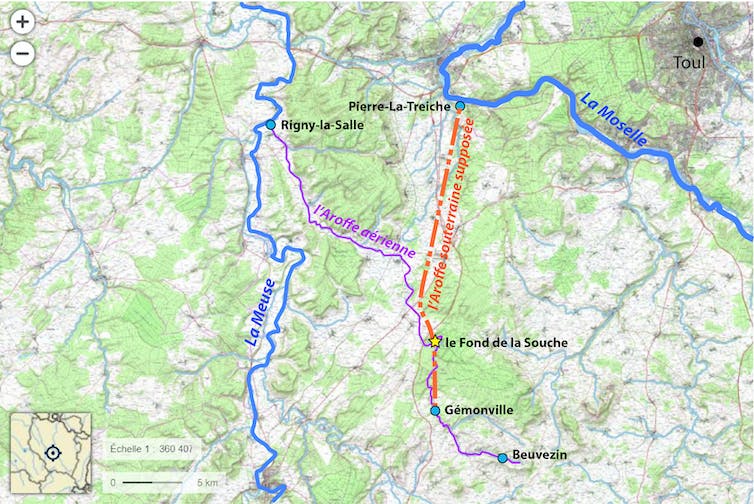 Supposed aerial and underground route of the Aroffe. Elise Chenot, Provided by the author

The Aroffe takes its source in Beuvezin and loses itself underground through a succession of fractures in Gémonville. The waters of the Aroffe reappear on the surface at the Rochotte spring in Pierre-la-Treiche and flow into the Moselle. In extremely rainy weather, the thirty or so kilometers of underground network fills up to an overflow which manifests itself on the surface by resurgences, locally called "deuilles", which play the role of overflow. The Aroffe then flows on the surface and goes into the Meuse. The objective of the study is to try to determine the precise underground course for research purposes.

Why are we interested in the Fond de la Souche resurgence ?

Following work carried out in 1971 by speleologists, a 25 meter deep fracture was opened at the Fond de la Souche in Harmonville. This fracture ends in a stream which, after about 200 meters, flows into a river forming a large underground gallery.

Underground topography of the Fond de la Souche. Vallet, 1983, Provided by the author

Fifteen years of explorations and topographic surveys have led to the current plan of the Fond de la Souche network: 2,500 meters of galleries are accessible to man but end at each end in a siphon, a completely drowned conduit, difficult and tedious to access with substantial underground diving equipment. Although several diving campaigns have been carried out to unravel the mysteries of these two drowned conduits, no new unflooded gallery has been reached.

From a hydrological point of view, the various observations seem to show that the river of the large gallery is not the Aroffe but rather one of its tributaries. Does the Aroffe flow nearby or in a completely different sector? What is its extent? As it is, the Fond de la Souche being the only manhole that can be penetrated, this cavity remains the best site to search for the underground Aroffe.

Forty years later, these questions remain, but the techniques evolve! The speleologists of the Union Spéléologique de l'Agglomération Nancéienne and the geologists of UniLaSalle recently met to experiment a non-destructive surface technique in order to continue this exploration.

How to detect underground galleries without destroying landscapes and ecosystems?

Very often, in order to directly reach a resource that is located deep underground (water, ore, gas...), geologists either make holes with drills or cut into mountains with huge shovels. These techniques are certainly efficient but have the enormous disadvantage of destroying ecosystems (fauna and flora habitats) and landscapes but also of chemically polluting the exploited sites. Moreover, they are extremely costly in terms of time, energy and money. 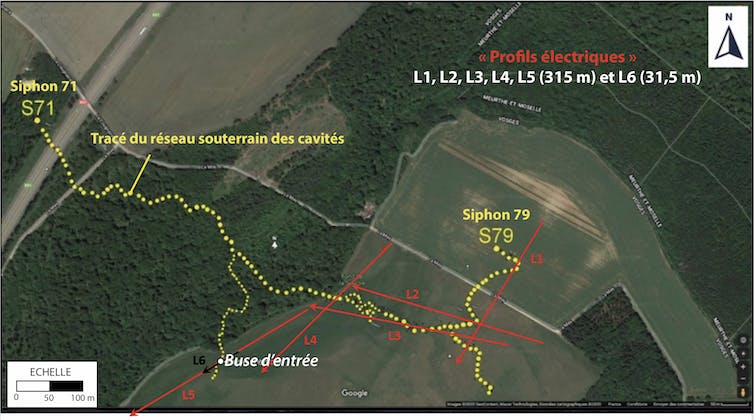 Location of electrical profiles. Elise Chenot, Provided by the author

To search for the underground route of the Fond de la Souche river galleries, we chose to test an indirect non-destructive method. Electrical tomography" is a geophysical method based on the capacity of a material to conduct current. Unlike air, water is highly conductive and allows the current to flow easily. The technique consists of measuring the electrical resistivity of the subsurface materials by injecting current along a line of electrodes planted in the ground.

The electrical resistivity of the subsoil depends on the nature of the rock, the porosity of the rock, the water content of the rock, fracturing or the presence of voids. In order to validate or not the use of this technique for the detection of cavities, a measurement campaign was organized in 2021 on the Fond de la Souche sector. This campaign took place at the end of the summer season, during which the cavities without water are filled with air and should theoretically be more resistive to the current. From the plan projected on an aerial photo, several electrical profiles were placed in relation to the already known galleries and their assumed locations.

Two of the profiles are placed near the entrance nozzle, perpendicular to the 25 meter deep fracture. The first one has an electrical penetration of 50 meters (L5), but a lower resolution than the second one, which only reaches a depth of 10 meters (L6). 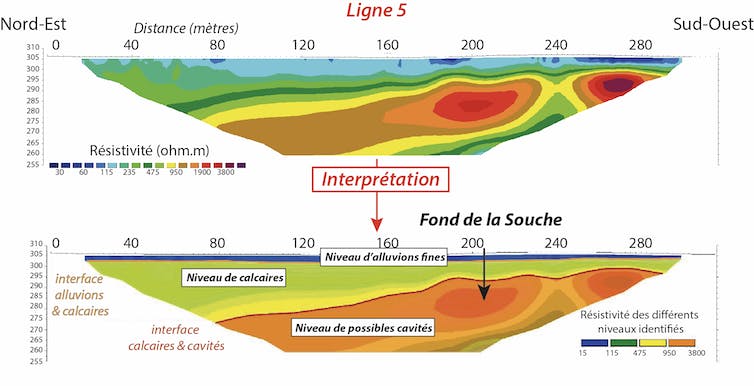 On the right side of profile L5, at 25 meters depth, the characteristic orange/red spots illustrate two zones of more resistive "material", compatible with the possible presence of the Fond de la Souche cavity.

On the second electrical profile (L6), the fracture is clearly detected in the middle by the electrical tomography in the form of a highly resistive zone in brown, which coincides with the topographic survey of the entrance shaft. 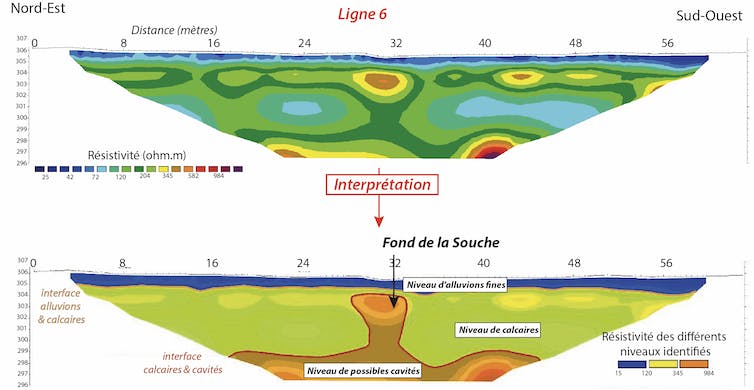 The technique of electrical tomography thus seems promising for our search for "voids". Even if a vast sector remains to be prospected in order to identify the entire route of the disappeared river, a next measurement campaign will allow us to identify the orientation of the galleries beyond the siphons. The research has only just begun and will be continued next year.

The USAN (Union Spéléologique de l'agglomération nancéienne) is a caving club that initiated this research activity (Christophe Prévot, Olivier Gradot and Théo Prévot) and finances it through the Fond d'Aide aux Actions Locales of the Fédération Française de Spéléologie (FFS). This exploratory study benefited from the geophysical expertise of Pascale Lutz and Michaël Goujon, teacher-researchers at UniLaSalle Beauvais, but also of their students Adrien Leroux, Solène Soyez and Emeline Rame. Also participating are teacher-researchers from the University of Lorraine (in geology-paleontology, Bernard Lathuilière and in geography-karstology, Benoît Losson). We thank the town hall of Harmonville and the owners of the plots who support this project and give us unlimited access to their plots.The Conversation 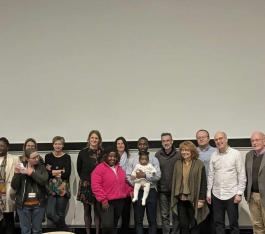 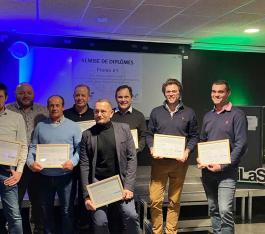